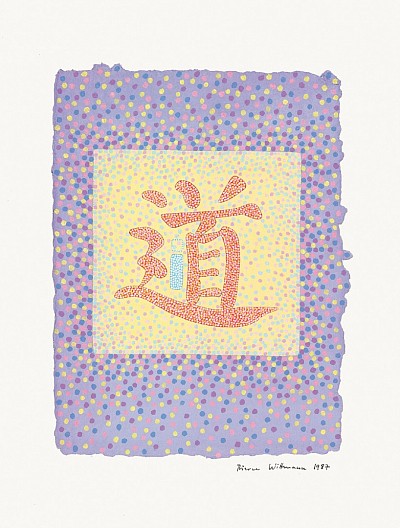 I have always been fascinated by Chinese writing. About fifteen years ago, I found a small book that taught, in the form of comic strips, how to write in Chinese. And I tackled the task. I loved it, and at the time I was practicing it for at least one hour every morning. After having finished the first volume, I got the next two, and then I went on to more sophisticated Chinese books. After this I stayed in Seoul, Korea, for several months to attend a school of calligraphy. The Koreans, although they now possess their own alphabet, have for millennia used Chinese writing; they still use it on some occasions, as do the Japanese. Later, I studied calligra­phy in Taiwan. Then I took courses in the Chinese language, but I never succeeded in speaking it fluently.

What fascinates me in Chinese writing is that it is com­posed of ideograms, and not of phonetic letters as in most languages. Every sign is a small picture that originally repre­sented graphically the object designated by the ideogram. With time, these drawings became stylised and have become the ideograms that we know today. The first traces of Chi­nese writing date back more than five thousand years; and the characters used today stabilised about three thousand years ago. It should be noted that a system of simplified ideograms appeared after the Chinese revolution at the beginning of the twentieth century. This is the one used nowadays in mainland China, whereas the traditional ideo­grams are still used in Taiwan and by Chinese living overseas.

The characteristic of an ideogram is that it is a semantic sign without a specific phonetic value, as are our numbers. When one writes the number 6, it means “6” for a French person as well as for an Australian or a Mexican, yet each language assigns it a specific phonetic value and pronounces it differently. This is what happens with Chinese ideograms, and allowed all the various peoples of the immense Chinese empire – and some neighbouring countries such as Korea, Japan and Vietnam – to use the same language and the same writing, each using its own particular pronunciation.

What I like in Chinese writing is that every ideogram is like a small painting. Incidentally, Chinese is traditionally written with a brush and ink, even though today felt pens and ball-point pens have replaced the brushes. Chinese calligraphy, using traditional techniques, is practiced by many adepts in China, Japan and Korea. It is an art form that possesses periods, styles, masters and masterpieces.

The drawing of each ideogram responds to very precise rules, concerning in particular the order and the direction in which the different strokes are drawn and their harmonious and balanced composition in a fictive square. Traditionally, Chinese is written from top to bottom and from right to left. The text is, therefore, formed of columns of ideograms and not of lines, and a Chinese book starts with what we con­sider as the last page.

Every ideogram is complete in itself and has its own meaning. It corresponds to a word. It is often composed of several parts, that are themselves simpler ideograms. These are called keys or radicals. There are about two hundred keys that make up the basic ideas of language, such as man, woman, water, wood, sun, moon, etc. All other ideograms are composed from the key ideograms. The ideogram that means ‘bright', for example, contains the key ‘sun' coupled to the key ‘moon'. Some ideograms include three, four, or even more, keys.

In the modern Chinese language, most ideas, or words, are composed of two ideograms – sometimes three or four – the second ideogram refining the meaning of the first. The ideogram ‘to go down', for example, when followed by the ideogram ‘rain', means ‘to rain'.

One of the difficulties of non-alphabetic languages is to classify and find words in lists, like dictionaries and direc­tories. The system used in Chinese dictionaries is to classify the words according to their main key. All words that contain this key are placed together; they are then classified according to the number of strokes that they comprise. If, for example, thirty ideograms contain the key ‘sun', each formed of ten strokes, it will be necessary to read the whole list to find the sought-after word. This method is quite disconcerting for the beginner.

The study of the Chinese language is a good way to find out about Chinese history, culture and thought, as we dis­cover western antiquity through the study of Latin and Greek. China is the most populated country in the world, with more than one billion two hundred million inhabitants. It is a country in full expansion. Important Chinese commu­nities exist in all regions of the world. The Chinese are very pros­perous and control the economy and trade of most countries in the Far East. Chinese living outside mainland China collectively may be the most important financial power in the world.

For an artist, the appeal of Chinese calligraphy is that it unites in an inseparable way beauty of form with semantic richness.

This text is a chapter of Pierre Wittmann's book, A Guide to Happiness for the Third Millennium.